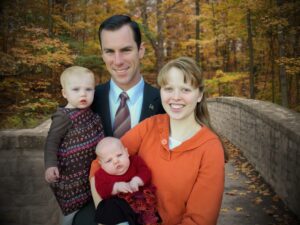 Dan was born in Harrisburg, Pennsylvania and reared north-west of Hershey. During his childhood, God used the positive influences of his church and home to prepare him for important choices that would be made during his teenage years. He personally shares that the ministry of Servant’s Heart Camp was a key influence upon his life as a teenager. After attending our opening week of summer camp in 2002, there was no question in his mind of future attendance. Camp immediately became the highlight of each year.

At the close of the evening rally on Friday, June 13, 2003, Dan made a decision that would largely determine the course of his life. The preacher had just finished a message concerning the subject of “full surrender”, the invitation was given, and Dan knew exactly what God wanted him to do. He must give his life to God! The decision was made. By the end of camp the following day, God had already begun to place within him a desire for the ministry of evangelism.

After answering God’s call upon His life, Dan sought every opportunity to serve on staff at SHCM. During his high school years, he served as a junior counselor and operational staff.

The years of being a camper at SHCM had come to an end and it was time for Dan to take the next step toward God’s calling. He enrolled in Bible college and completed a four year degree with an emphasis on the ministry of evangelism.

While in college, Dan met his future wife. Elizabeth was the daughter of a pastor in the state of Maine, who desired to further her studies in music. Following their graduation in 2012, Dan and Elizabeth were married.

After having entered the ministry of evangelism, Servant’s Heart Camp scheduled Dan to preach during the 2013 summer season. The Brubakers were expecting their first child to be born soon after their time at camp that week, but God had different plans. He surprised everyone with the swift mid-night birth of their first daughter, Chloe.

The Brubakers are thrilled with the opportunity to serve at SHCM. They desire their ministry of evangelism to be a blessing and assistance to the promotion of the camp.

To learn more of the Brubakers and their ministry, take a moment to visit their website linked below.
BrubakerMinistries.org